I’ve been in Lombardy in September, the perfect time to visit Mantua and Alto Mantovano. I want to tell you about two places, or monuments; one you can’t really miss out, the other falls outside any touristic itinerary. The Palazzo Ducale is an architectural complex of 35.000 mq that was the residence of the Gonzaga family from 1328 until 1707. The whole structure as we know it today dates back to XVI century. The first two buildings to be erected were the Palazzo del Capitano and the Magna Domus. Both look over the Piazza Sordello. They were built between 1273 and 1328 by request of the Bonacolsi family, ruler of Mantua. Undoubtedly it was with the advent of the Gonzagas that the palace became what it is today, both from an architectural and artistic point of view. Masterpieces like the frescoes by Pisanello, representing the Ciclo Cavalleresco, or the Camera degli Sposi (‘bridal chamber’), frescoed by Mantegna, were realised on the Gonzaga’s request. Between the end of 1300 and the beginning of 1400 they built the Castello di San Giorgio, planned by Bartolini da Novara and requested by Ludovico II Gonzaga. You can buy the tickets to visit the Palazzo Ducale online or at the ticket office at the entrance of the palace. For the Camera degli Sposi you need a separate ticket which is sold by appointment.

Unfortunately Mantova was not spared by the awful earthquake of 2012. There are scaffolding here and there, necessary for the renovation and the security of buildings. Nevertheless, if you saw the aftermath of the 2012 earthquake, you will notice that big improvements have been made.

Besides the architectural and artistic heritage of Mantua and Alto Mantovano, you can find another gem in Castiglione delle Stiviere: the International Red Cross Museum. But why is it located here? Why is it so important? History can answer these questions. A history that is a heritage to be jealously guarded and constantly passed on. The great international humanitarian organisation of the Red Cross has solid foundation in Castiglione delle Stiviere since the second independence war. A very important and, in my opinion, very underestimated character passed by here: Jean Henry Dunant. The Story of Henry Dunant

The Swiss Henry Dunant (1828-1910) was a fervent Calvinist and, even though he never completed his studies, he was a self-made man. Thanks to his vast self-taught culture, he made his way as a director of banking institutions. He had a very open and modern mind, compared to his time.

He became an entrepreneur, and that’s when the troubles begun for him. He invested some capitals, borrowed by the Swiss, to grow crops in Tunisia.  He obtained all the necessary concessions by the rulers of Tunisia, except for the one for the exploitation of water. In a short time his companies had to face some difficulties. But what has this to do with the Red Cross? Not even Dunant knew it back then. He borrowed more money from the banks in Switzerland and went to Italy, looking for Napoleon III, Emperor of France. He wanted to meet him to have the concession for the use of water in Tunisia, which was under the French control. 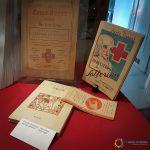 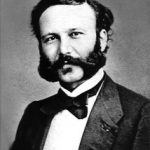 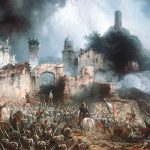 The Battle of Solferino by Carlo Bossoli

Henry Dunant was stopped in Castiglione delle Stiviere. Not far from there, in Solferino, Napoleon III was fighting one of the bloodiest battles in history in which 100.000 people died. Until that moment Dunant didn’t know what the word ‘war’ actually meant. People knew the battles only through the images of the newspapers. The war was represented with epic scenes of glorious fights, with romantic images in which the losses were illustrated with two or three people lying down, but never bleeding.

One morning Dunant saw the few survived and wounded soldiers returning home, with their dead companions hanging over their head. That’s when he really understood what war was. He decided to erase all his life and his interests as an entrepreneur. He reached a conclusion while watching the women of Castiglione delle Stiviere helping the wounded men of both parties, with buckets full of water, as they were all brothers. He couldn’t stand the fact that all of that was occurring and that there was no one in charge to rescue the injured.

In 1862 Dunant went back to Switzerland and write down his emotions and experience in the book ‘A Memory of Solferino”. In 1864, after just two years, he managed to bring 12 countries together to sing the Geneva Convention. This marked the birth of the Red Cross and the affirmation of a character who was able to see beyond his own interests and his own life. In 1901 he was given the Nobel Prize for Peace. Dunant, disgraced, never withdrew the prize, which consisted in a considerable amount of money, but he gave orders that the creditors could draw from this sum to pay off his debts.

There are just two Red Cross Museum which depend directly on the International Organisation of the Red Cross in the world. One is located in Geneva, the other in Castiglione delle Stiviere, the most important. In this museum it is possible to see the history of the Red Cross all over again, from its first foundation with the story of the character of Jeans Henry Dunant to its modern activities. You will find many crates guarding historical materials, from the first field surgical tools to the first portable respirators or the kits for transfusions. The collection of back and body stretchers and of the first ambulances with piston engines still functioning today is also very beautiful. One of the first ambulances

I really recommend this museum, it’ll help you fully understand the territory of Mantua and and Alto Mantovano. Go book a guided tour, probably you will be guided by the curator Giuseppe Barrile, who I’m really grateful to, as he told me all these interesting things. He knows everything about Dunant and the Red Cross. All I wrote about in here comes from his brilliant exposition.

To maintain the theme of Dunant and to give uneven grater consideration to my visit in Mantua and Alto Mantovano, I decided to sojourn in Castiglione delle Stiviere, at the Hotel Dunant. You probably know already from the name of the hotel that is has something to do with Henry Dunant. Well, it is a hotel-museum, inspired by and a tribute of the life of the philanthropist. One of the communal spaces

The three floors of this structure constitute the ‘spatial portrait’ of Dunant. It is deliberately a ‘zero stars’ hotel. The guest is left free from the preconceptions that could contribute to give a simple classification. Inside and in the courtyard there are items of furniture, true masterpieces of design realised by Ermanno Preti. The courtyard of Hotel Dunant

There is an interesting juxtaposition of original antique items, such as the chests of drawers and dressers which date back to the beginning of ‘900, installed in the rooms and communal spaces, as if they fluctuate in the air. This location is undoubtedly unique!