A few days in Valtellina

Slow itinerary throughout the area of Sondrio and its jewels

Regolido and Dazio are a joy even on a rainy day. I arrived in Malpensa at 10:30 am Italy time. I had estimated that it would take me four hours total to land, collect my bag, rent my car, and drive the 83 miles to Dazio. I was about right! I parked the little blue Citroen at 14:38 – 8 minutes later than I expected. I was going to take a walk and try out my new wide-angle lens but the weather did not cooperate. So I drove to Iperal in Morbegno for much needed supplies. I got back, unpacked, and headed straight for the Gorgonzola Dolce and Valtellina Casera that I long for all year. With a bit of bread, prosciutto crudo, tomato, and Montepulciano D’Abruzzo in a tiny bottle I had a quick feast. Dazio – the view from my veranda

By then it was dry and 69 degrees and 19:45 – dark dusk!de So I headed for a nice two mile walk to and from the small hamlet down the road from Dazio – quaint and pretty Regolido.  I said “hello” to three familiar Madonna’s on the way, snapped a few pictures in the waning light and had a joyous first walk in the Valtellina. Tomorrow if the weather permits I am off to Sondrio to try out that wide-angle lens on some old doors. Wish me good weather! Enjoy my first photos! 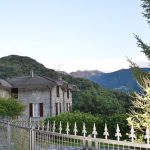 Via Castello – the street I live on! 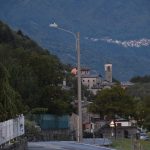 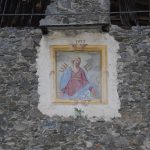 2nd Day, Delebio after the rain

I was hoping for nice weather and a trip to Sondrio today. It was not to be. It was pouring rain when I woke up and raining hard two hours later. What’s a girl with a camera to do on such a day? Go to the mall to buy make-up! I, also, bought a can opener. The apartment has three wine bottle openers but no can opener. Guests have their priorities!

When I got outside the weather Goddess smiled on me and the rain stopped leaving me a fabulous grey day in the mid-60’s. Cool grey days are the best for photos and walking. There are no shadows or blazes from the sun in my photos and I can walk all day in comfort! Because I have been meaning to do it for five years but never did – I decided to walk around Delebio – a small town I drive through every year on the road to Dazio. 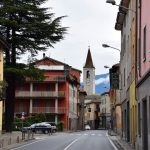 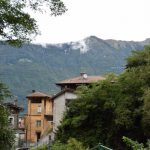 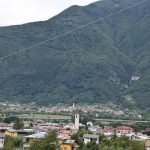 DELEBIO – view of the town from the path into the mountains

Delebio is a pretty town on an ancient road through the Valtellina. Through the length of the town the busy roadway is called the Via Stelvio. The name of the road changes before and after the town. The Passo del Stelvio – the Stelvio Pass – to which the via leads was constructed in 1825 and is the highest motorway in Italy. Passo del Stelvio climbs through the Ortler Alps and is 9,045 feet at its highest – just 43 feet short of France’s Col de l’Iseran Pass. If one cares to follow the road through the Valtellina all the way to Bormio one may drive the 75 hairpin turns of the Stelvio Pass that connects Lombardy and Trentino-Alto Adige. This is not a drive I want to make and I was happy to be in Delebio!

Delebio does not claim much fame but it is host to some of the best views in the Valtellina. There was a bloody battle fought here in 1432 between the Visconti of Milano and the Republic of Venice who fought for dominion over the fertile Valtellina. Milan won! The village has about 3,000 inhabitants and it is cosied into the side of the mountains with old stone paths that meander up the face of the alps. The lovely Adda River runs through the town and there is a wonderful road along both sides of the river that I would love to ride my bicycle and my scooter on! 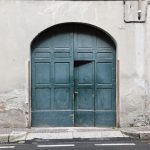 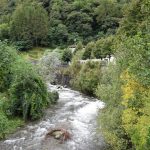 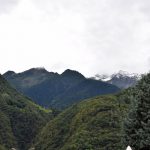 DELEBIO – view of the Alps from the city

I found four lovely churches here – only one was open and one – the tiniest – is clearly ancient and not in use. The parish church – Chiesa San Carpoforo – is filled with astonishing artwork. The many early 18th century paintings are by the Swiss-Italian painter Giuseppe Antonio Petrini of Carona (1677-1759) who painted many works in the area in such towns as Carona (province of Bergamo), Delebio (province of Sondrio), Como (province of Como) and Lugano (Switzerland). The 19th century frescoes are by Giovanni Gavazzeni – a Virgo born a few miles down the road in Talamona (province of Sondio) in 1841. He died old for the times in November 1907. The beautiful pink, 17th century church of San Gerolamo was not open. It was situated on a street too narrow to allow me to back up enough to take a full façade photo. I hope you can imagine its full frontal effect – gorgeous!

I have no information for this small church. But it is clearly ancient and interesting! This church was set back one street from the Via Stelvio and it was dedicated as a small park. I could not locate a name. I found many beautiful doors in the town, nine fountains – two of which are laundry fountains, and six Wall Madonna’s. I hope my photos give you the flavor of pretty Delebio!

I have a favorite walk that I take each time I stay here and any time I have a few hours to spare.  The climb from Dazio to Caspano – the town with the best views – is about two miles. Because the climb is steep it takes somewhat longer than one would expect. But I have the pleasure of the views and the trip through the villages on the way. DAZIO – view from the road to Caspano

Cadelsasso is the first town on the way and it is a lovely small frazione where I can enjoy a pilfered fig or two, and the contemplation of the sculpture of Angelo Gabriele Fierro whose work one finds wherever the stone and the place please him.

Cadelpicco is next and it shares the mountain, a church, and a laundry fountain with goldfish in it with the eight-house village of Bedoglio – a hamlet with a beautiful Wall Madonna and not much else.  Finally, one reaches Caspano – the village settled by the Paravicini family whose crest – a swan – one finds above many doors. 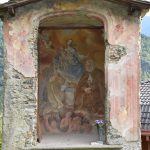 Dazio – first shrine on the climb 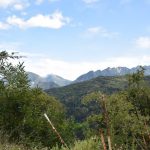 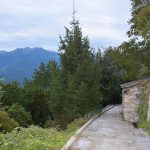 Cadelsasso – the old road to the village. This is the town laundry fountain

All these towns save Dazio, are part of the commune of Civo. There are 22 frazione or hamlets associated with Civo – a mountain village of about 1,000 inhabitants that is laterally west of Dazio. Dazio is not associated with Civo even though it is closer to many of the Civo frazione than Civo itself. However, Dazio is in a fertile plain that lies between the mountains and it is an independent ‘comune’. These small villages are popular now with weekend and summer visitors and there are only handfuls of year-round inhabitants. The mountains also host ten Località and ten Maggenghi all likewise associated with Civo. These are alpine pasture areas where people traditionally brought their livestock to graze for the summer. The homes in these areas are seasonal and do not have electricity or other services. They often must be hiked to on narrow and steep paths that are miles long. Families must carry in supplies and use solar panels, and gas and wood for ‘power’. The history of the area is agricultural where livestock and silkworms supported the local economy. Most towns additionally had a small mill where corn and wheat were ground. The paths and roads are ancient though and these mountains have been inhabited for many centuries. 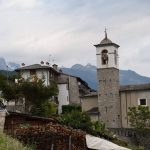 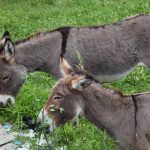 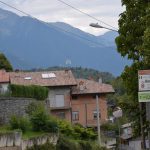 Caspano is a joy to traverse. Its winding, narrow streets are clean and colorful with carefully maintained homes decorated with care and devotion. The town has astonishing views and one can understand why a Milan aristocrat was moved to settle here. Paravicini was a Milan noble who fled to these mountains in 1250 to escape the war between the Guelphs and Ghibellines which had robbed him of his possessions and sense of well-being. He came with all he could carry and one servant. He built a palace – Villa Paravicini which still stands – and endowed the town savoring its clean air, sweet water, and pleasant climate – not to mention its freedom from war. 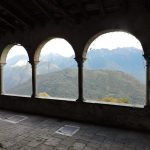 Caspano – the view from the porch of the church 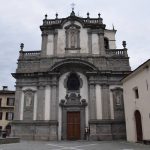 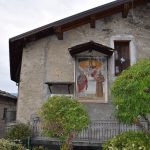 Because I take the narrow local road, I enter the town from the back of the impressive church of Saint Bartholomew walking immediately into the Piazza di Caspano. I truly crave this walk and this area. Enjoy my re-acquaintance photos. I never tire of greeting the familiar nor fail to be charmed by what one finds here.