Slow Tour in Emilia, in search of the history of the Po Delta!

The Po Delta area is one of the most interesting naturalistic destinations in Italy. Autumn and Spring are the best time for your bike trip here, when the weather is still quite mild. Combine the pleasure of a slow tour alongside the river banks and the country roads with a visit to Ferrara, a must-do when travelling through this areas.

I’m going around Ferrara by bike. Ferrara really is one of a kind. It’s a very liveable city: the bastions of its Walls are still upright in a circle and around them goes a pedestrian and bike lane where people can walk, run or ride at every hour of the day. It’s not by chance that many people from Ferrara are great runners! The first figure I run into in Ferrara is Biagio Rossetti. Who is him, you ask? Perhaps the Traffic and Public Works local authority? Well, why not… Except that he was born in Ferrara in 1447. He was a great town planner and he imagined Ferrara as the Ideal City. Ferrara was commissioned by Ercole I d’Este, with the intent to build no less than an avant-garde city for Europe and the Western world. Biagio Rossetti designed Ferrara with wide interlacing streets arranged geometrically. Since he conceived a real coherent urban endeavour, he is considered the very first modern town planner and it is just thanks to him if Ferrara is considered the very first modern city in Europe. Obviously, Rossetti did not pulled his plan out of the air. He took inspiration from the Roman tradition and Vitruvius, but above all he completely redid a part added to the medieval nucleus (the popular Addizione Erculea). Rossetti clearly had democratic ideals: the city is an harmonious complex, not split between the quarter of the powerful people and that of the mass as it happened in other cities like in the Mantua of the Gonzaga. Here in Ferrara the palaces are spread all over the city. Rossetti also thought about the possible development of the city, that’s why Ferrara still represents a unique place, and a paradise for bikes and liveability. Not surprisingly, it is a UNESCO World Heritage property. Visiting Ferrara by bike is really worth it. Start from the suburban ring wall, feeling in the countryside. Then, turn to one of the path leading down from the river bank and find yourself in the town centre. You will reach the Quadrivio degli Angeli, a crossroads from where you can see the Palazzo dei Diamanti, one of the architectural masterpieces of Ferrara’s Renaissance, one of Biagio Rossetti’s extraordinary creations.

Biagio Rossetti conceived this architecture playing with stones, realising a rustication made up by 8.500 blocks of white marble with pink veining, which consists in a series of prisms enriching the palace with light effects. There is no diamond equal to another, each one is oriented so as to catch the light and give somehow a reflection effect. But why is it that all this was created and developed in Ferrara? 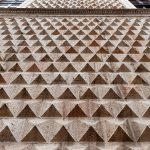 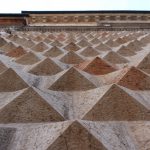 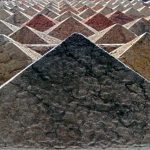 The National Archaeological Museum of Ferrara

The city of Ferrara is the result of prosperity and diversity of cultures coming from the ancient villages which rose and developed on the river Po in different historical periods, such as Voghenza, Comacchio and Spina. And we can understand it by looking at the maps that can be found at the Archaeological Museum in Palazzo Costabili. In the Sala delle Mappe (Hall of Maps) you can see how the Po delta changed over the centuries, allowing the city of Spina to arise and become a crossroad for trades in the Mediterranean sea. What kind of goods they used to trade, you ask? Mainly iron coming from the Island of Elba, on the Tyrrhenian Sea. Why bring metals all the way to Spina? It was a matter of rivalry and power influences. After a great naval combat dating back to 5 centuries before Christ, the Tyrrhenian area was split in two: the Southern area to the Phoenicians, the Northern area to the Etruscans. Phoenicians used to block the Etruscan trades, so Etruscan had to find another trade route and they built the city of Spina: an harbour on the Adriatic sea to keep on trading with Greece!

The Etruscan port town of Spina

They say Spina was founded by the Pelasgians, namely the first Sea Peoples, and in particular by the Argonauts. The fact is that its discovery has been a real archaeological mystery for many centuries: everyone knew it had to be somewhere, but nobody knew where it could be! That is because the river Po is a living thing, it reshapes the banks and the landscape at every flood, so it is very hard to interprete historical resources.

The first one to guess where Spina could be located was a doctor from Bologna, Gian Francesco Bonaveri, by the end of 1600. Actually, the discovery of the ancient city of Spina was made by chance in 1922, during a clean-up digging. Its necropolis gave us over 4000 graves back, and this is a sign that Spina was a very lively city, besides being an harbour, a cosmopolitan place where people spoke many languages, practicing so many different businesses.

How Spina used to look like? It was a classic seaport, very important but poor in its buildings. Those miserable huts actually shielded valuable and luxurious pieces of furniture, like the imported Attic Pottery. Spina had very humble dwellings despite being very wealthy. A prosperity caming from the trades and tolls. Syusy at the necropolis of Spina

On the upper floor of the Museum dedicated to Spina, you can find the luxurious grave goods found in the necropolis. Here is a beautiful and highly decorated crater used for the preparation of wine, then tasted in cups called Kylix, during banquets or symposiums. There’s a very interesting story behind the kylix by the time of Etruscans: sometimes they used wine also for a parlour game called Kottabos. Basically one had to spin the kylix on his finger and hit a person with the wine in the cup, who would be his (sexual) partner for the rest of the night. Obviously, if one was quite good at it and still enough sober, he would hit the person he desired the most! This game was a sign of the light heartedness and of the carelessness lifestyle of the Etruscans. They could afford this thanks to the favourable trades that granted them a high standard of living. 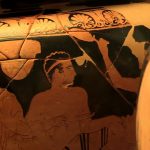 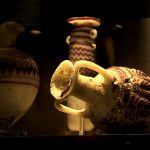 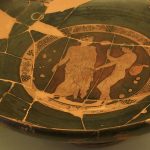 A Kylix from Spina’s necropolis

Do you like jewellery? Then visit the Sala degli Ori (the Hall of Gold Jewellery). The golden jewellery found in the graves of Spina are exhibited like in a jeweller shop. Actually, the consultation for the set-up of the hall is by Bulgari. Besides gold, another symbol of wealth was amber. The legend wants that amber pieces were the tears of the sisters of Phaeton, who fell in the Eridano, that is the Po river. This legend suggests that the amber came from the Po, but we now know it is impossible. There is no amber here. The Po area, Spina in particular, was were all the procedures for the commerce of amber were completed, coming from the Baltic sea and probably carried through the waterways of central Europe to Greece. In the past, rivers were kind of the ancient highways!