Busseto, Roncole, Sant’Agata on the path of the Master

Welcome to Busseto, Giuseppe Verdi’s hometown. Busseto is a very interesting village, with an old city centre with beautiful palaces, courtyards and squares. A place gets its fascination from its history and from the characters who used to live it. You know, I decided to visit Samoa because Robert Louise Stevenson spent his last years there. Then I visited Hiva Hoa because of Gauguin and the Svalbard Islands because of Amundsen (who passed away there). Giuseppe Verdi spent his life in Busseto and he is still living here thanks to all the places dedicated to him. The most important is the Verdi Theatre, located in Piazza Verdi, just behind a monument representing the Master. The theatre is a real jewel, looking like a smaller version of the Scala Theatre in Milan, with precious frescoes and decorations. Thanks to its position – on the first floor, surrounded by the famous Rocca Pallavicino – acoustics sounds perfect. Master Verdi had a controversial relationship with this Theatre: his fellow citizens dedicated the building to him, but he didn’t show up at the inauguration on 15 August 1868 (that day all the ladies were wearing something green, verde in Italian, in his honour) and he never entered the theatre again. He tought the theatre had costed way too much and he didn’t ask for it. 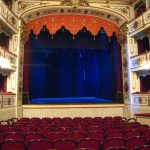 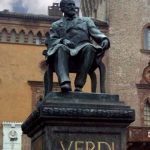 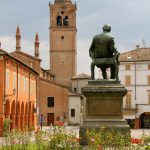 Cross Busseto’s main square and reach Casa Barezzi (Verdi’s father in law), that is a Museum today. Verdi onece wrote: “I am, I was and I will always be a farmer in Le Roncole”. Indeed he had an obsessive relation with his place of birth. 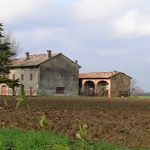 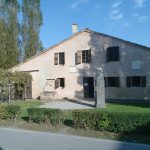 Verdi was born on 10 October 1813 in the village Le Roncole, known as Roncole Verdi today. His house was a tavern managed by his parents. The visit is very interesting: the main structure of the building has not changed, whereas the furnishings have been recreated by architect Cervellati, who also restored the Verdi Theatre. Verdi wanted to demolish this little house to prevent it from becoming a pilgrimage destination: he really couldn’t bear his fame! The bedroom where young Verdi did his practise was totally surrounded by landscape and animals, his obsession is quite clear to me now. When he became famous and rich, he built a wonderful villa in Sant’Agata, which was actually a farm. All the rooms, including his bedroom, are located on the ground floor and connected to the garden, which has a great view of the landscape. Angelo Carrara Verdi (Verdi’s great nephew and owner of the Villa) shows me the small table where the Master used to write: it is strategically located behind a window, so that he could always supervise the outside. Apparently, Verdi wanted to supervise everything. He always got up at 4 in the morning to go checking his lands, using a special chariot, a sort of off-road vehicle of that time. He invested what he earned in his farm and lands. Verdi was quite a mean man, however he used to give a house and a plot of land to his retired workers. At the end, he left almost everything to local charity organizations.

Get a taste of local products

The Azienda Agricola Casella in the area of Fiorenzuola d’Arda is both a farmhouse and a farming culture museum. The owners are able to cook the traditional dishes that Verdi used to love. People can find local products also in the very city centre of Busseto, in Piazza Verdi: the Salsamenteria is said to be the most ancient tavern in the world, dating from 1500. Verdi used to come here to eat, drink, compose his works and to admire women. That’s why this tavern is so famous! Later Toscanini, D’Annunzio, Ricordi, Pavarotti, Carreras and Zucchero praised the Salsamenteria in their works. Come here and taste some sausages, perfectly combined with a glass of red wine, the Gutturnio. According to tradition you should drink the wine from a cup while putting your thumb in it. Try also the restaurant I due Foscari, managed by Carlo Bergonzi, described as the best Verdi’s tenor in the 20th century. Landscape, history, culture and great food: Busseto represents a perfect mix! But what about the weather? When is it better to spend here a week-end? Cosetta Allegri, my guide here, almost gets angry: “People come here all the year round!”. And what about winter fog? “Winter is the best season, the fog softens both the panorama and the Culatello!”.

What do Verdi’s music and his origin have in common? Afro Gotti, an intellectual from Busseto, said: “His music has the same sensibility of a Cotechino when you cut it with a fork. He used to compose his works with the same dedication and precision needed to conserve the pork. That’s why people told Verdi again and again that he was too much traditional and attached to his origin”. While we are chatting, an old man walks across the square singing “Pom cot! Pom cot!”, an old traditional rhyme that sounds very much like the march in the Aida.