Visiting the lovely artistic town in the Province of Viterbo

Calcata is a small medieval village on the top of a mesa about 30 miles north of Rome. In the province of Viterbo in the Latium region, Calcata overlooks the valley of the Treia River. Ancient Calcata was condemned back in the 1930s because the Italian government feared the volcanic rock on which the walled castle town was built would collapse. The towns people were moved to a new Calcata a short distance away. The town remained abandoned for three decades. In the 1960s hippies and artists began squatting in the old stone buildings. The artists eventually purchased their abodes and advocated with the government to have the town reevaluated for habitation. They succeeded. The town is no longer condemned and it has a thriving artist community and some very funky people! Cats are well loved creatures in Rome and around it. I have heard that the residents of Rome survived Second World War by eating cats… Now they cherish them and strays are everywhere rejected by none and fed by all. 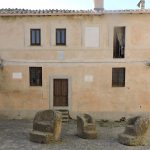 Local art in the square 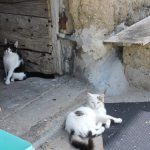 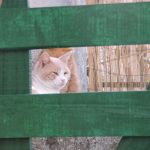 In case the artist community and the hill – top location with old – old buildings is not enough to intrigue you – Calcata is (or was) home to the foreskin of Jesus! Yes – the Holy Prepuce was housed since 1527 in the small local church there – the 14th century Chiesa di Santissimo Nome di Gesù – Church of the Most Holy Name of Jesus. Church of the Most Holy Name of Jesus

The church is dedicated to two saints: Saint Cornelius – a pope who died in 253 – and Saint Cipriano. Cyprian of Carthage was an important writer of the early Catholic Church and is known as the African Pope. He died in 258. Their statues grace each side of the main altar.

The church is filled with images of angels. The Catholic Angelic Hierarchy is interesting with its nine types of angels that occupy three Orders or Choirs. In the Chiesa di Santissimo Nome di Gesù I could not identify angels from each of the three Orders. I found angels from two spheres or orders. There were Cherubim from the first sphere, and Archangels and Messenger Angels from the third sphere. From the third or lowest sphere there is Michael the Archangel seen guarding the altar from above. Archangels protect the ecclesia – the mother church. The Archangel is aided by Cherubim of the first or highest sphere. Cherubim guard the throne of God and are often seen crowning Mary, Jesus, or God the Father.