The Battle of the Oranges of Ivrea

The Carnival celebrations of Ivrea is a unique event, you must see

The Carnival at Ivrea is a historical Italian event, very unique because of its old tradition: the battle of the oranges. Our first meeting here was with our team in Ivrea… And by our team I mean the orange throwers of Credendari who gave use the fantastic opportunity to experience this Carnival.

The story of Carnival tells that there was an arrogant and mean landlord, who made the rule that he would spend the  wedding nigh with each newly married girl. He would also do that with the newly-married miller’s daughter Violetta. But the first night of her marriage, Violetta killed him, so she had freed the whole city from this terrible oppression. Every year someone plays the role of the hero Violetta and all the teams are throwing oranges to each others, while riding through the town squares by carts. After Napoleon entered the country in Northern Italy, this traditional play received a role-play from the French army. 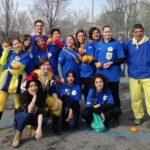 The team before the battle 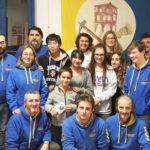 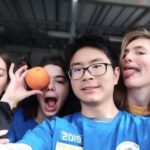 The guys ready to go

After we knew a little bit more about the Carnival, could it begin for real. At January 6th we all had to come to Ivrea for the official opening of the Carnival. The people with the drums and the pipes (i pifferi e tamburi) played the song Once upon time... This was also the first time we saw the General and Violetta. The General made a speech. The next time we met, all of us had tasted for the first time fat beans (in Italian fagioli grassi). People always eat fat beans during Carnival time in Ivrea. I thought the dish was not bad, and so did the other students.

Early in the morning on Sunday, February 24th, we went to watch how the horses of the carts get settled and how the carts do look like. Then we went to the center of Ivrea to watch all the 51 cart presenting themeselves. There were carts beautifully decorated and others which were not. The people on the 51 carts, are the one who are going to battle against the 9 teams who are on foot… It was beautiful to see people’s happiness during the parade. On Thursday the General visits all the schools of Ivrea, then the kids are all free from school. I didn’t eperience it because I don’t go to school at Ivrea… That was a pity. That night, most of the young people went out at the center of Ivrea. On Saturday the Carnival escorted the General and the miller’s daughter through the town square. In the evening we went around with our team in the city. First, we had to wait in the main square for the woman playing Violetta this year,to show up off the balcony. Then, we strolled with our team through the city, as a sort of parade. There were also some beautiful fireworks… and after the parade, there was feste through the whole city. 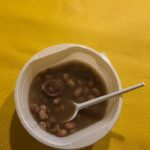 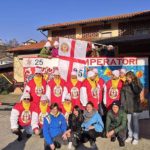 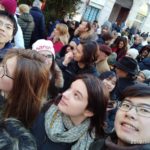 Sunday March 3rd, we had to be at 2 o’clock at our team’s square… this was the first day of the battle! We had to get our – so called – “baptism” to make ourselves ready for what was going to come… We got kneel while one of our team threw with a lot of force one orange on our head. After this the first cart drove in, first we had to watch what was going to happen and how to cover ourselves the best way. The best way to cover is with one arm or hand in front of your face… The first rounds went pretty well, but after a while a girl from Thailand got hit very hard on her face… At this point, I got a little bit more scared and took a little bit of distance. The next day it started again at 2 o’clock and I like it very much, because I have seen also the other teams on the other squares. Our team was the one with the less amount of people, because it was the last one established. There are in total 9 teams, from old to the youngest: Asso di picche, Aranceri della morte, Scacchi, Scorpioni di Arduino, Tuchini del Borghetto, Pantera Nera, I Diavoli, Mercenari and Credendari aranceri. Tuesday was the battle day, ending with the visit of the General and Violetta at all the squares. That evening there was something like a funeral for the Carnival, where people got fire to a huge pole. The miller’s daughter raised the sword, as a sign that the city is free! After that, flutes and the drummers kept playing. The last tradition is to eat some polenta with codfish… but we couldn’t do it, because we had to come back to school! 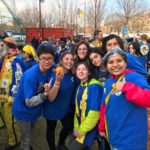 The team after battle 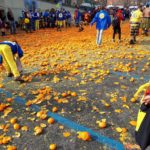 I really liked this Carnival because of his uniqueness, but it is also a little bit crazy. I would recommend everyone who gets the opportunity to go. I think it can also be beautiful just to see if you don’t participate.

Fleur de Vries is a young Dutch student attending one year of her high school path in Italy, thanks to AFS Intercultura Onlus, an international, voluntary, non-governmental, non-profit organization that provides intercultural learning opportunities around the world.