Inside the fortress of Vignola

Visit “Tracce in Luce”, the free exhibition until October 18th

Some days ago I was in Vignola, a beautiful little city near Modena, in the Emilia Romagna region. Vignola is famous for its fortress (Rocca di Vignola) and for its cherries.

I went there to attend the inauguration of the Tutti i Colori del Pennello event (that is “all the colors of the paintbrush”), named after the tower of the fortress of Vignola, the Pennello tower, which needed restoration after the earthquake of 2012. The event celebrates precisely the end of the restoration of the tower, which led to the re-discovering of medieval decorations on the external walls of the fortress! In fact, a part of the Tutti I colori del Pennello project, named Tracce in Luce, has been dedicated to the study of the evidence of the original decorations and to the investigation of the city archives’ documents. 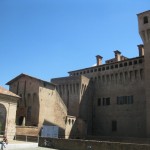 The fortress of Vignola 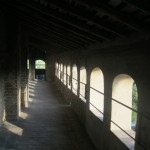 Vignola, inside the fortress 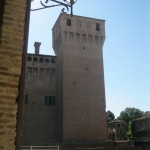 At night we could admire the video projections of the original red, yellow and white decorations directly on the walls of the fortress, thanks to a 3D laser scanning technology. It was simply amazing! During the day I had the chance to visit the restored Pennello tower and found out that the fortress has a very long story to tell! It was probably built in the 9th century and enlarged in the 15th century, when it turned into the feudal court of the landowner Contrari family. It was them who built the Pennello tower, whose original shape reminded of a paintbrush. On the top of the tower you will find the room of the prison warden and the prisons as well. In one of them a prisoner drew episodes of his life, including the expected end through execution… 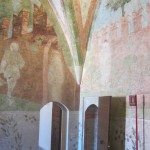 Room of the Pavilion 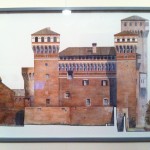 Reconstruction of the fortress by architect Morlacchi 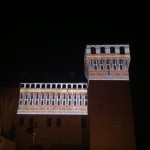 I also visited the elegant rooms of the ground floor and first floor. From the Room of the Doves to the Room of the Pavilion, which is my favourite because it reminds you of the original garden of the fortress… And I ended the visit in the little Contrari chapel, where the paintings are still the original ones!