Lecco: Colico and the Piona Abbey

A stroll in the water front town of Colico

On the way to Sondrio, we made a short stop in Colico to visit the lovely town square and sit for awhile to gaze at the mountain that shadows the town – Monte Legnone. At 8,560 feet (1.6 miles)  Monte Legnone is the highest peak in the Lecco Alps. Colico is the last town one encounters on the drive up the west side of Lake Como before the lake ends and the road turns sharply east running through the middle of the Valtellina Valley. Or – Colico is the first town one encounters on the west side of Lake Como when one has traveled west from the old Roman roads from Bormio – Tirano and Sondrio – the northernmost strongholds of the old Lombard and Grison and Roman empires in Italy. Whatever one’s perspective, this small water front town that sits at the junction of the River Adda and Lago Como and is important as a transportation hub is a lovely respite from a long – slow – drive to the ski slopes and hot springs spas of Bormio fifty miles away. With its pink basilica – Church of Saint George (the dragon slayer!) and picturesque historical square bordered by seventh to nineteenth century homes and businesses, and beautiful park and promenade, Colico is worth a stroll and a gelato by the beach. Saint George was from Lydda – a town also known as Lod in a country Herodotus speaks of in his Histories as a “district of Syria, called Palaistinê”. Lydda would be in present day Palestine which is occupied by Israel. George was born into a Greek noble family who practiced Christianity against the local polytheistic custom of the times. Saint George lived in the 3rd century (275/281 – 303 AD) and was either 22 or 28 years old when he was martyred (meaning murdered!) for his faith. Saint George is one of Catholicisms holiest saints and he is listed as one of the Fourteen Holy Helpers – saints known for their miracles and intercessions against deadly diseases especially the bubonic plague better known as the Black Death of the 14th century. George was a Roman solider as were most noble youth of his day. When enjoined by the emperor to sacrifice to the Roman deities, he refused. The emperor, of course, had him tortured and executed. But – George would not die! Legend claims that George was put to death three times unsuccessfully – he was chopped into small pieces, he was buried alive, he was burned at the stake. All three times God brought him back to life. Finally, he was decapitated but although this killed him for good – witnesses claim that milk flowed from his severed neck instead of blood! Catholics do so love their gory myths!

There are many tourists in Colico year round. Those in the summer come for the lake and the Italian leg of the Kitesurfing World Cup. Those in the winter come for access to the skiing in Italy and Switzerland – St Moritz being only about 45 miles away.

I decided to drive to Piona Abbey to see the 7th century religious complex that I had not visited before. The original church – and an apse remains – was dedicated to Saint Justina. The church that stands now was built in the early 12th century – around 1138. The current 12th century church is dedicated to San Nicola – who we know as Saint Nicholas.

Saint Justina is much more interesting than San Nicola. Justina of Padua converted a pagan magician named Cyprian who was from Antioch (now Turkey) to Christianity and was then killed in a pogrom against Christians led by the Roman emperor Diocletian. 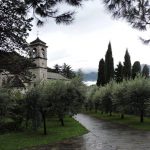 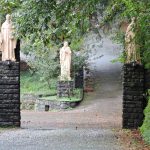 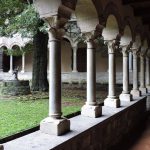 The abbey sits on a peninsula in Lake Como and to get to it one must drive over a small mountain and down to the lake edge. I had no idea the type of road I would encounter but I should have realized! The narrow, one-lane road was paved with round stones covered with moss. The rain and moss and slippery stones gave me butterflies as I drove the few miles down to the abbey. I was rewarded with an end to the rain as soon as I got there and some gorgeous grey photos of the abbey grounds and courtyard.