A Christmas Carol in the Upper Via Emilia

Christmas Markets between Piacenza and Parma

“I will honour Christmas in my heart, and try to keep it all the year” (Charles Dickens)

Thus wrote Charles Dickens in A Christmas Carol, an extraordinary work that has inspired us to dream, charming and enchanting us with its dialogue and characters. A masterpiece of literature that we re-read or watch once again every year before Christmas, as if wanting to stop time and go back to our childhoods to relive the excitement and sensations of when we were little.

This wondrous story accompanies us in this new chapter, dedicated to the Christmas markets of Via Emilia, where past, present and future fill the streets of old city centres and small villages in the hinterland. Our story begins in the upper part of Emilia, in the area of Piacenza, marked by the flow of the big river and where hilly landscapes alternate with vast plains.

A few kilometres from the Emilian city we find a small village with immense touristic appeal, the village of Grazzano Visconti. A place that fills young and old alike with wonder. It is a reconstruction of a medieval town that has brought the traditions of its past into the 21st century. It is not by chance that it is known as an ‘unreal village that truly exists’ and is the strongest tourist draw in the province of Piacenza. In this village, people still work word and iron and produce pottery according to the teachings of unwritten culture and learning, passed down, or better still, whispered from father to son. Here, the love for creative artisanship still reigns supreme, while the village is protected from the ravages of time, with style and passion, by the current owners, the descendants of Duke Giuseppe Visconti of Modrone. 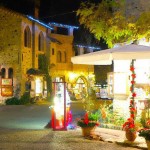 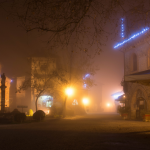 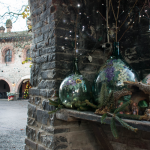 In this little corner of Emilia, one finds a Christmas market that attracts visitors from all over Italy and beyond. The stands present the artisanship and know-how of creatives and artists who proudly display their wares, created to celebrate Christmas. The atmosphere is surreal and the village is wrapped up in the scents of Christmas and winter. Grazzano Visconti in all its beauty. A picturesque setting enriched by the musical notes of Christmas songs played throughout the village, which is surrounded by a park filled with a vast variety of vegetation, offering a stunning natural spectacle at the changing of the seasons. The market of Grazzano Visconti is open from 6 December to 6 January. Games, manger scenes and Christmas decorations are the heart of the event, which is now in its second year. Admission is free!

Now we will head down the main road leading to Fidenza, in the heart of the Terre Verdiane. This town is located halfway between Piacenza and Parma, and is proudly home to a masterpiece of Romanesque-Po architecture, the cathedral, which dates to the late 11th/early 12th century and is considered a pilgrim temple par excellence. Every year, the roads of the town’s old centre host a Christmas market featuring the arts and trades, where artisanship reigns.

And from Fidenza, we head to the city of music and good food par excellence: Parma. Its elegance, historical monuments and sumptuous palazzos welcome us to the city centre and open up the path to workshops from times gone by, alternating with stunning, fine boutiques. Parma is a dynamic, welcoming city, and its Christmas market in Piazza Ghiaia is a tradition not to be missed! A symbolic site in the city, in the past as much as in the present, the heart of commerce and exchange, it was recently modernised with major urban renewal work resulting in the new architecture in Piazza Ghiaia between 2010 and 2012. 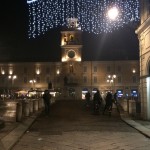 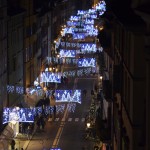 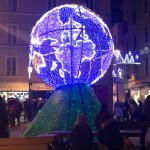 At the end November and for the month of December, the site hosts more than sixty exhibitors, offering their masterpieces of artistic craftsmanship, objects and antique furniture and tasty seasonal delights, like roasted chestnuts, aromatic brittles and traditional treats, all to be enjoyed while wandering among the colourful, festively decorated stands. Admission to the event is free and it is open from 9 am to 7 pm (6, 7, 8 and 13 December). For the feast of Saint Lucy, on 13 December, the programme will be expanded to include a charming village of old and rural trades. An opportunity to see the work of expert hands, showing how butter used to be made, how people used to wash laundry with cinders and how the ‘rezdore’ (ladies of the house) in their traditional clothing prepare typical Christmas dishes, like savoury stuffed Cappelletti pasta and sweet stuffed Tortél Dóls di Colorno pasta, for the delight of food lovers.