Unconventional tour through its most famous and less-known monuments

Each time of the year is good to visit Pisa, so rich of history, culture and tradition. Even if everybody thinks that the best time to do it is during spring, considering that the weather is generally mild, I suggest you to go there in Autumn. Days will be shorter but they are still long enough and the light in the afternoon gives unique sunsets in each part of the city. Furthermore you will avoid to bump into drove of tourists.

From the wine & food point of view in autumn you will find olive oil and wine just made, and white truffles, the most internationally appreciated products from Pisa.

The city is easily reachable from the Galileo Galilei International Airport, that works with the main European low-cost airlines. In this review I will tell you about my day spent in Pisa in a different way compared with the traditional tour guides. Obviously I spent the first half of my day at Miracle Square and its monuments. Soon after I walked till the Blue Palace, recently renovated. In the afternoon I moved a bit out of the city, to Molina di Quosa, at Food and Wine Podere Belvedere association, where I attended a cooking class, making with Dario a delicious traditional dinner.

The cathedral of Santa Maria Assunta, the Leaning Tower and the Baptistery, with a wonderful garden enclosed by medieval walls, constitute Miracle Square . This is one of the most famous square in the world, and the Leaning Tower of Pisa is considered the first symbol of Italy. It’s our icon.

Nevertheless crowds of tourists that are attracted by the peculiarity of the tower and from the possibility of taking pictures pretending to sustain it, don’t know its history, greatness and the power of the domination of Pisa in the past. The cathedral was built  during the most glorious period of the city, which thanks to its victories and conquests after sea wars, it was called “The New Rome”. From the war loot the architect Buschetto realized in 1064 the cathedral of Santa Maria Assunta, on the remains of the former one previously destroyed.

To show Pisa’s power the side walls of this building were made with the most refined pieces from other monuments destroyed during the victorious battles.

Inside the cathedral stands out the representation of Saint John the Baptist made by Cimabue and the wonderful pulpit by Giovanni Pisano. The geographic context of the ancient Miracle Square it was really different from the current one. Back in those times there was a river, now gone, the Auser, that skimmed the square and linked the river Arno and the sea with the local harbor used since the Etruscan époque. 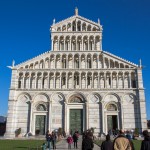 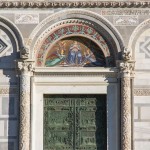 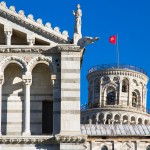 Just try to imagine what could have been felt like sailing to Pisa admiring the majestic beauty of the cathedral with the Baptistery and the Leaning Tower.

In 1552 the Baptistery was built by Diotisalvi, but the tower bell is from 1173, and the architect is unknown. Experts say that it reminds the Saint Sepulchre of Jerusalem, giving testimony of an oriental influence in Pisa’s architecture. To make Miracle Square as we know it today, it was the construction of the Spedale Nuovo in 1257, which hosts the Sinopie Museum, and in 1277 with the construction of the Monumental Cemetery.

My advice is to take all the time you need to visit and live this square and all its monuments. Don’t take pictures just from the outside, visit the inside of the cathedral, the Baptistery and go to the top of the tower to watch from there the unique view of the city.

From Piazza del Duomo, I walked by Via Santa Maria, reaching the Lungarno Antonio Pacinotti. I’ve crossed Solferino’s Bridge and I kept going on Lungarno Gambacorti, where I took some pictures of Della Spina’s Church, and from there I reached the Blue Palace. It took around 15 minutes. The Blue Palace is full of art, culture and history. Often this place is unfairly ignored by tour guides, but it should be a must for a one-day visit of Pisa.

Why to visit the Blue Palace? The permanent collection of the Blue Palace contains a lot of paintings, sculptures and archeological evidences. The art work that more than the others got my attention was the Polittico d’Agnano made by Cecco Di Pietro in 14th century. After the renovating of the palace there have been a lot of important exhibition of Chagall, Mirò, Picasso, Kandinsky, Andy Warhol, Modigliani and Toulouse – Lautrec, so if you are visiting Pisa, you should always visit the Blue Palace to be updated on the new exhibitions.

It’s almost evening now, after an amazing day spent between the history and culture of Pisa, and now I am really hungry! That’s a good chance to get to know better the local food!

I wanted something more than a restaurant, so I found on the web Il Circolo Enogastronomico Podere Belvedere. I talked with the householder Dario, and he told me that what they do is much more than making food. They also organize excursions on Monte Pisano and cooking classes. I chose the last one. Podere Belvedere is easily reachable from Pisa in 15 minutes by car. If you don’t know how to get there, you can call Dario, who could even fetch you if necessary. My suggestion is to reach Podere in the afternoon, so you can enjoy the sunset there and if the weather is good you could even see Pisa and its coast. From here sunsets are unique. I think that in winter here is better coming for lunch. For the main dish we made two kinds of pasta, strictly handmade using only traditional ingredients. We made maltagliati with a sauce of leek and lard, and cappellacci del brigante, giant ravioli filled with potatoes, spicy nutmeg and pepper, with just butter and sage, delicious!

For the second dish we made the peposo ( “pepperish” ), a medieval recipe. It’s beef stew cooked with whole grains of pepper and red wine, served with mashed potatoes. Before this we started with appetizers consisting of local cured meats and toasted bread topped with olive oil, everything was bio.

The dinner was amazing and it completed the fantastic day I spent in Pisa.

The airport of Pisa Galileo Galilei is an international airport connected to the city centre by the high-speed people mover (rides leaves every 5/8 minutes, the ride lasts 5 minutes and costs 2,7€). You can reach Pisa also by train, through Florence.

Pisa is a small city, the best way to visit the city centre is on foot. Anyway, if you consider to visit some places nearby, you can get the bus (single ticket costs 1,5€ and it lasts 70 minutes).

Pisa is a small city in Tuscany, in the centre of Italy. Here you finde the Leaning Tower, one of the iconic symbols representing Italian architecture and beauty all over the world! The whole area of the tower is great, with both a church and a baptistery: Piazza dei Miracoli and the Camposanto. Discover more about Pisa on Italia Slow Tour.

Check Palazzo Blu website for art exhibit and all the cultural initiatives by the Normale University.