(Read the first day, the second day and the third day)

The ancient village of Sambuca

The last day had arrived, but my adventure wasn’t over. I packed my bag and went to have breakfast downstairs, in the main square. I ordered my cappuccino and my pistachio pastry and sat there, observing the passengers, and enjoying the silence of the early morning. The elderly were already awake and active in their conversations. Some sat down in the shade, starring in the distance, with a sense of calm and inner peace, and a sort of smile of their faces that communicated serenity to me. A sort of: “I have seen and lived so many things, that now, I can simply enjoy stillness and peace”.

Maria Rita, the girl who welcomed me into my temporary house, arrived with her husband and I joined them at their table. Then Pierfilippo came and sat with us. Maria Rita helps out Pierfilippo in organizing excursions and finding lodging for incoming tourists. They started talking about new “business opportunities”, about a particular town called Sambuca which was named one of the most beautiful ancient villages in Europe. Maria Rita has an aunt there, who has a huge beautiful mansion and they were thinking about turning the place into a bed and breakfast for tourists. I felt like everything I had studied in my International Management Masters was put into practice by these people: managing unpredictability and last minute situations, seeking and spotting new opportunities, team work and value preservation. And all this, not in the name of mere business, but in the name of the love for their territory and of the desire of making these places known to other people. I was again impressed by the skills and drive of these people, despite obstacles, problems and difficulties. Then Pierfilippo realized we were running late and the brainstorming could have lasted a lot longer, so he said the magic words: “Amunì” (meaning let’s go) and so we said goodbye and headed towards the car. But then as we passed by, Pierfilippo wanted to introduce me to the elderly people I was observing earlier, who were sitting down and chatting. I met two lovely old men, and I find out one of them had lived in Stuttgart, Germany for 20 years, right after the second world war, a period in which Sicily was very poor, therefore many people migrated towards various destinations. He still remembered German and was happy to share his past memories with me. Pierfilippo then told me that each town has a yearly celebration day, when they welcome back the migrants, people who had left their home town back in the days, and who nevertheless come back every year to see their “terra”. I thought this was a really amazing thing, because as I know, other countries do not see people who left their country in a moment of difficulty in a very good light. But at Sant’Angelo Muxaro they cherish them and give them a warm welcome every year, also because they had been coming back and investing in their land, building beautiful houses and bringing new knowledge and modernity, while at the same time helping preserve the old traditions and spreading out the word abroad about the beauty of their land, bringing on visitors and tourism.

“Amunì”! Pierfilippo said again, and this time we left for San Biagio Platani, where I was to see the famous Bread Arches. On our way, Pierfilippo told me a bit about this celebration. Celebrating both religious and civil victories by erecting arches of triumph, dates back to the 1500’s, under the Spanish domination, as a symbol of victory. During the Baroque period these type of celebrations were even richer and more spectacular in decorations, entertainment and symbology. The Bread Arches of San Biagio, or Easter Arches, date back to the second half of the 17th century, when the two brotherhoods of the Madunnara (of Virgin Mary) and Signurara (of Jesus) decided to turn the moment of encounter between the Statue of Mary and that of Christ at Easter, in a big ceremony, with beautiful decorations and having the bread as a main theme, symbolizing wealth, fertility and well being. Back then, The Arches were less outstanding and artistic than they are today, and the bread used in decorating the arches was edible and was meant to feed the people, symbolizing a thank you to the Lord in celebrating his resurrection. Nowadays, people start working hard already in the month of January at the handcrafted decorations, that are much more elaborated that they used to be. There are three artists that direct the whole project and assign the different groups various pieces of art: Carmello Navarra, Alessandro Caldara and Salvatore Virone. These are both replicas of real religious paintings and also unique pieces created by the 3 artists. The decorations are all made of bread, pasta, cereals and fruit, hand assembled, shaped and painted by the people. Young and elderly, professional handcrafts men and common people, artists get together and work at this project for months. 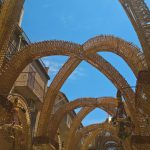 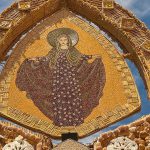 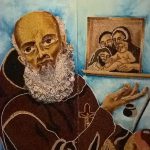 It is something that creates a sense of community among locals, creating something together, something to be proud of, something that makes the town look colourful and that keeps traditions alive. The celebration does not only represent a religious triumph, of Christ over death, but also a triumph of nature over winter. That explains the explosions of bright and lively colours of the decorations and the feeling of joy it offers to whoever sees this. Visitors are welcome to participate at the making of, and enter the various labs, each specialized in the creation of a particular part of the Arches. Moreover, at night they are illuminated, adding up a magical feel to the whole scenery, one can enjoy by walking under the Arches and admiring the handmade beauty. 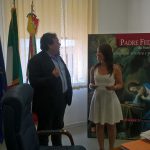 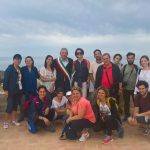 Group pic with the Mayor

After a close observation of the various decorations and having met some locals who told me these lovely stories, we went to meet the mayor Santino Sabella who gave a warm welcome and told me about the importance this celebration has for the locals, the hard work behind the creation of it and the sense of pride people feel when the Arches are erected and ready to be admired. It is something I have never seen anywhere else, and it is things like this that make travelling worth while. We left the town behind, with its wonderful colours, people and traditions, and I headed towards Agrigento were I was to catch the bus to Trapani and fly back home. Claudia was waiting for us there, and after a warm goodbye hug to Pierfilippo and Claudia, as a thank you for everything they had shown me and made me experience, I said goodbye, not an Addio but an Arrivederci. I still had a lot to see in Agrigento and Sicily in general and I promised myself to go back as soon as I could.