A Slow Tour across Umbria

Discover the Italian green region and its unforgettable landscapes

The green region Umbria is the perfect Slow Tour destination, full of history and spirituality. Our slow tour starts from Norcia at 600 metres hight. Its name comes from the Etruscan goddess Northia. Norcia is still surrounded by the city old walls. There is also a Benedictine Abbey, built on the ruins of the Saint’s house. At the abbey you can ask for a pint of their famous beer made by the monks. In the crypt of Benedictine basilica, you can also attend their prayer and the Gregorian chants. It stroke me that monks were all very young, coming from all over the world. They looked like a rock band! They were wearing all the same dresses, hair and beard, as distinguishing marks of their membership to a group with a strong identity and well-defined behavioural norms. They are such a revolutionary group compared to the general trend! It’s been a really significant experience for me, thanks also to the young American Vice Prior I met.

You can’t speak about Sibyllines Mounts and Northia without naming the goddess Fortuna (chance). Walking toward Castelluccio, I realized to be in the heart of the mountain territory where the legendary Sybil lived. She used to predict the future and she is typically iconized living in cave, as an hermit with long hair and long dress. During the centuries various and different priests tried to personify Sybil, sometimes considered young and beautiful and sometimes an old woman.

Sybil is usually represented surrounded by her books, especially the bulky book of the men destinies. She was indeed a Pizia, an oracle who predicts the future as many others in the ancient civilizations, like the one of Delphi. She is bound neither to the past, nor to the present or the future, she knows everything and everything coexists with her, that’s why Sybil can predict everything. She is represented blindfolded: she can’t see anything, but actually she sees everything. This reminds the Einstein physic concept of time, as a conviction that really doesn’t exist.

Before arriving at Castelluccio, I stopped along the road at the beginning of the levels. The group of farmers that caught my attention was working the field using a big old combine harvester… they were harvesting lentils, the local typical product, appreciated because small but full of nourishment. By now, farmers cultivate almost only lentils, because it is the only product ensuring a market. 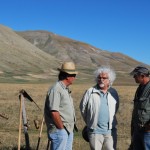 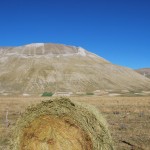 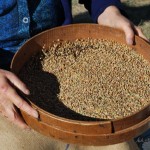 The whole process is mechanized, but a 80 year-old lady showed us how people in the past used to separate the lentils from the residues, using a simple sieve handled only by women. The traces left from an ancient agricultural law are still existing here, it’s amazing. The land belongs therefore to all and none, anyone can cultivate and harvest the lentils in his field, and then all the fields are again available to everyone for the pasturage.

We slept at the refuge Colle Le Cese, ready to hike with donkeys on the Sibillini Mounts on the following early morning. Mount Vettore predominates the amazing view of the Mounts Sibillini valley, where all the landscape colours change according with the different seasons and the different moments of the day. The atmosphere is archaic, with flocks of sheep wandering around. If there were a yurts village, we could really  think to be in Mongolia. People still talk about the Sybil as a real presence. Early in the morning the valley disappears, fog covers everything, it looks like Avalon lake.

Just outside the village of Castelluccio, Roberto of La Mulattiera organization together with other tourists and donkeys, mules and horses are waiting for us. The animals transport the food for our lunch on the road. The path goes through the heart of the mount, we will walk all day long arriving by the evening back in Norcia. The weather is perfect, with beautiful colours and an amazing landscape. Umbria proves to be a region allowing wide-angle photograph, no eco-monsters you have to cut off from the picture!

We started keeping the animals strong for their bridles, then someone started to be on tow of the donkeys, instead of pulling them. Animals don’t feel our responsibility to be politically correct: the horse demands to be the leader, the donkeys follow queuing hierarchically. Among the donkeys group, is there the boss and its gregarious, they all walk together and can’t be separated. 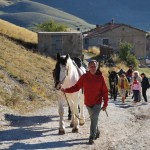 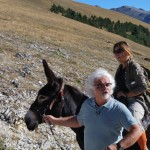 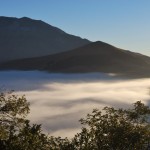 After a little, I -Syusy- decided to climb up a donkey pulled by Patrizio, but I don’t trust neither the animal nor him, who walks too close to the ravine.

After another little, I-Patrizio- climbed up a donkey too, and I’ve soon noticed that it always choosed the most risky path. Roberto said it is normal… So I decided to ride a horse, but my horse suddenly got nervous because of a strange bird flying. After the climb, we didn’t feel guilty eating fiercely our lunch, because we deserve it!

The sky is full of hang-gliders. Castelluccio is very famous for these kinds of sports, this valley is well sheltered from the winds and people come here from all over the world to do some paragliding and hang-gliding, while admiring this beautiful landscape.

I’d like to meet a real inhabitant of Norcia. I visit Giuseppe Fausti in his farm, where a lot of pigs grow in the wild. Giuseppe is standing in the middle of the field, whistling for the pigs that run towards him. He cuddles his animals, referring to each one by name even if they are hundreds. Giuseppe is talking about how much he loves those pigs while showing me his laboratory, where he cuts, slices, cleans and prepares the meat to become ham and chops. This is a real art.

Talking about typical food, the following day I paid a visit to the truffle seller Nicola Berardi and his searching dogs. Truffle is a precious product, both black and white, but it also exists a less rare variety called scorzone, a “summer truffle” very good anyway. It’s amazing to walk around this peculiar countryside with these dogs, I can’t believe that each of them is able to find a very little truffle ball hidden under the leaves, a couple of inches underground. Nicola has got his role to play: when the dog starts scrabbling, he must immediately occur to avoid that the dog eat the truffle.

I slept again in Norcia at the Grotta Azzurra Hotel. I have an appointment with Nicola Checcarelli, we will go on with this slow tour across Umbria by bike, following the bike path created on the ex railway Norcia-Spoleto. My guide Paolo Capocci told me that the railway was stopped in 1968 to be renovated only a short time ago. I won’t go by bike all the way long, even if I am on a pedal assisted bike. At Serravalle Cristiana someone is waiting for me! 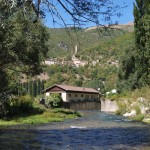 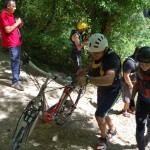 Our Slow Tour continues by bike 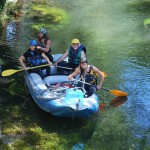 Kayak in the River

We will try a rafting experience along the river Corno. In my life I am scared of many things: the effort, to fall down of a horse or of a camel, but I have never been afraid of water. I went rafting many times in different places, always relying on the guides’ experience. Cristiana and his young and nice students helped me to enjoy my coming down on the dinghy and the landscape of Valnerina with the Biselli gorge. By car, I could never enjoy this enchanting view, miracles of a slow tour!

This slow tour across Umbria follows the path of the water, that runs his course from the source of the Clitunno river to the Marmore Falls. The view of river Clitunno’s source is a unique postcard: a little limpid and green lake surrounded by willows and poplars. The famous Temple of Clitumnus, built around the 500 century a.C., stands only one kilometre beyond.

The environmental conditions are perfect for olive trees growing, don’t miss a break in one of the many oil mills in this area, where you will taste the precious local olive oil.

Next stop: Spoleto. We slept at Palazzo Leti, one of the amazing historical buildings restored and turned into hotels, residences or B&B. The roof of Palazzo Leti offers a great view. I took a walking tour of the city with my friend Moreno Carlini. Start your walking tour from the symbol of Spoleto, a fascinating bridge called Ponte delle Torri, quoted by Goethe. Then follow the path of the walls around the old city, untill the summit of Sant’Elia hill. Here there is a fortress called Rocca Albornoziana, an old jail recently restored. Don’t miss a stop at House-Museum of Giancarlo Menotti, the author of the first Festival of the 2 Worlds, that made Spoleto world renowned.

This is just a small part of our tour through Umbria region. A veritable slow tour in a unique landscape. Nowadays landscape and territory could be highly contaminated by the industrial and urban human presence, but luckily industrial areas and warehouses in Umbria are just a few, agriculture is flourishing and the typical local products draw tourists.

At Montefalco, for example, there are a lot of different specialities, like Sagrantino wine. Sagrantino is made of vine varieties that pretend to have attract Saint Francis here from the East. There is a centuries-old grapevine that has preserved the local variety and that now is stored in the Monastery of Saint Clare, in the old town centre.

History, landscape, architecture and cooking depend one on the other, and only going on a slow tour of these areas we had the time to realize it.