Slow Emilia: Nonantola and its Abbey

Discover some hidden art treasures in a tiny perfect village

There is a place, right in the heart of the Po Valley, far away from the traditional tourist routes, a small town about 10 km from Modena, which holds great treasures: Nonantola. An unusual journey that expresses the beauty of a little known land, able to portray the ancient architecture and transmit sets of emotions with its historic buildings, its abbey, its museum and its ancient villas.

Nonantola was established as a Roman colony and it jealously still preserves its signs. A destination that owes its fame to the Middle Ages, and that’s deeply linked to the Benedictine Monastery of St. Sylvester, founded in 752 A.D. from the Lombard Anselm. The air is chilly, we are in the middle of autumn and the colorful foliage of the trees joins us in our visit. A carpet of brightly colored leaves appears as an elegant path that leads the way to the beautiful treasures of the place. A light scent of wet grass and the distinctive flat landscape of the Po Valley, welcome us with a veil of melancholy. In order to understand the history of this town, we have to enter into the streets of the center to discover its squares and its palaces. The old town looks like a painting, with its Clock Tower, with its Piazza del Pozzo enclosed on three of its sides by buildings that, since the four hundred, housed the room in which the Council of the City used to meet. 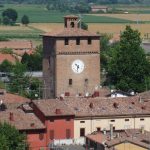 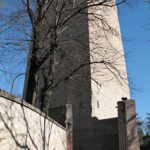 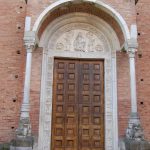 Our eyes are drawn to a beautiful building showing typical eighteenth and nineteenth century lines: The Residence of the New Agrarian Partecipanza of Nonantola, the town hall until 1898. Inside the building it is preserved the important archive of the Agrarian Partecipanza of Nonantola, while a permanent exhibition tells the tales of this ages-old institution and its evolution over the centuries. We go along the main street of the old town, Via Roma, where we can observe some beautifully crafted buildings, including Palazzo Previdi. We are in the heart of the village, in the Caduti Partigiani square, where the complex of the ancient monastery stands out as beautiful example of Italian monastic centers. The central element is the Abbey of San Silvestro, one of the most significant examples of Romanesque art in northern Italy, together with the Cathedral of Modena. A stately structure divided into three naves which enchants with its majesty. In the past, the abbey church represented the heart of religious and cultural center of medieval Europe. That’s right, in a small village located in the Po Valley, you can witness 1300 years of history and art, a heritage symbol of gone by eras. Since its creation until the birth of Commons, the Abbey has delighted in the favor of emperors, especially during the reign of Charlemagne and the Carolingians. On the outside, the façade is dominated by the prothyrum, supported by two columns bearing-lions, and it frames the beautiful Wiligelmo portal. Once through the portal we are overwhelmed by that sense of suspension, of vastness that the abbey has the power to release. We are impressed by the inside, manifesting itself solemn and austere in its simplicity, punctuated by massive pillars that converge towards the main altar (XVI century) dedicated to San Silvestro. Stop, think and admire – this is how this ancient abbey continues to guide and encourage us. Its splendor lies in its enormous dimensions, in its colorless serenity and in its austerity. Guided by our astonishment, we arrive to the crypt, where his 64 Ancient stone columns seem to smooth the intensity of the passing of the centuries. The lights and shadows change as if they were alive, and here the voice of the abbey is powerful and regal. There is not a single centimeter of these walls that doesn’t show sign of his glory days.

Another treasure that awaits for us is represented by the Museum of the Abbey. It is located in the Abbatial palace, the building of the ancient monastery. A part of this Museum preserves some beautiful works of art that come from the churches of the Archdiocese of Modena-Nonantola. The other part shows the “Abbey Treasure”. The Museum shows famous parchments: the principal two are a donation of Mathilda of Canossa, dated 1108, with her characteristic signum, and the parchment of Charlemagne of the year 798, bearing the well-known monogram of the founder of the Holy Roman Empire. Our journey has come to an end. Every moment spent in this village of the plains was a valuable experience. An infinite microcosm that we captured in our minds, like a photographic lens, where the simplicity of daily life meets with the magnificence of the art and history of Italy.