Between the end of the XIX century and the first decades of the XX century the Liberty style took root in Italy, as in the rest of Europe. The style was named after a London shop specialized in fabrics and curtains with floral motifs. The middle and the upper middle class of Florence grew fond of this current. They were so thrilled with this kind of decorative art that they had many residential villas and vacation properties built in this peculiar style. The exquisite ceramic decorations, created since 1896 by Galileo Chini in a furnace on the outskirts of the city, gave a boost to this trend.

It is quite easy to take a journey through the Liberty style in Florence; unfortunately only a few buildings survived the senseless demolitions over the years. You can start from the best example, that is Villa Broggi-Caraceni, in via Scipione Ammirato 99, built in 1911 and designed by Giovanni Michelazzi (Florence, 1879-1920), widely considered the greatest architect of this style in Florence. The basic structure, the decorations and the interior finish, embellished with an inventive helical staircase, are very original. Next to it there is Villa Ravazzini (via Scipione Ammirato 101), designed by the same architect, and famous for the impressive ceramic panels, the floral patterns at the edges of the windows and the wooden shelves that support the roof.

A few dozen meters ahead (in via Cimabue) you can take a look at the curious ceramic decoration overlooking an ancient workshop and depicting a happy couple on a vintage car.

We arrive then at the Antonini House (via Orcagna 53, at the corner of Via Giotto), designed by Adolfo Coppedé (Florence, 1871 – Montemurlo, 1951), the younger brother of the more famous Gino, both sons of Mariano, one of the most famous painters of the time. Finished in 1907, it is characterized by a rich profusion of figures and ornaments, among which a winged head threatening eagles, and enigmatic sphinxes standing out at the sides of the beautiful gate, in which iron leaves and branches are superbly intertwined. 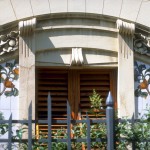 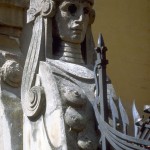 In the nearby via del Ghirlandaio you can admire the extraordinary pediment of the former Studio Galileo Chini, designed in 1914 by architect U. Giusti. In the nearby Piazza D’Azeglio, at no. 39, you will find another important building, Villa Uzielli, built between 1904 and 1906 and designed by Paolo Emilio André (Florence, 1877-1939). Moving away a little from this area, you can reach the Rinaldo Carnielo Foundation in Savonarola Square 14, at the corner of Via Benivieni. It is an impressive building, dating from 1885, that was the home studio of sculptor Rinaldo Carnielo. It was probably Rinaldo himself who made the façade in 1911-12. 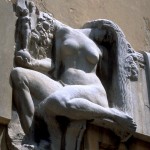 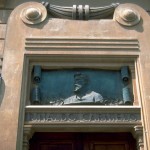 In via Della Robbia you can admire the elegant Villa Ciuti (built in 1910), characterized by a nice little balcony with floral twists, and in via XX Settembre there is Villa Galeotti Flori (later Toccafondi), designed by Michelazzi in 1915. Here you can notice two noteworthy small details: a tile with the name of the architect and a curious iron snake coiling around the gutter pipe.

Then if you approach the bank of the Arno river you will see, in Borgo Ognissanti 26, the Gallery House, built in 1911 and designed by Michelazzi. It is considered one of the most significant examples of Italian Liberty style. Our last appointment is outside the city centre: in via Giano della Bella you can admire the two superb Ville Lampredi (at number 13 and 9), designed by Michelazzi between 1908 and 1910 for the builder Lampredi. Astonishing winged dragons support the central balcony of the first villa. Moreover you can notice the dragon heads and the ceramics by Galileo Chini above the windows. Three circular motifs surround the three balconies. The two buildings are characteristic because they were built after the disastrous earthquake of Messina in 1908, which prompted architects to develop new building techniques as forms of seismic protection.

The airport of Florence is an international airport connected to the city centre by a bus service (rides every 30 minutes, 6€, it takes 20 minutes to the city). For transcontinental flights you have to stop in other airports. Consider to get to Florence by train from other major Italian cities (from Rome or Milan, i.e.), both Trenitalia and Italo companies stop at St Maria Novella railway stations.

Florence is a small city and all the most important monuments are close to each other so the best way to visit the city is on foot or by bike. In Florence is available the mobike bike sharing service (it costs 0,69€ for a 20 minutes ride). Anyway is there public transports, a single ticket costs 1,5€ and lasts 60 minutes.

Florence is the capital city of Tuscany region, in the centre of Italy. The city of Italian Renaissance! In your sightseeing tour, don’t skip St. Maria del Fiore cathedral with Brunelleschi’s great Dome, the Old Bridge on river Arno and the Uffizi gallery where you can find some very important works of art (see Botticelli’s “Primavera”). Get the tickets on line, to skip the long queue!

The best view on the entire city is from Piazzale Michelangelo (i.e. Michelangelo sq.) and you should visit Palazzo Pitti too, with its amazing Garden – the Giardino di Boboli -. If you consider a tour nearby, we recommend you to visit Fiesole.

We also offer a FlorenceTown tour promo to our users! Here you can find a travel diary of the “Inferno Tour” inspired by Dan Brown’s novel.

Florence is quite expensive and so are the accomodation, but Italia Slow Tour user can get a special discount on some hotels. Enjoy!