Rome is a wild and noisy mix of ancient history and modern Italian culture, and a megacity filled with the artifacts of Roman culture and power, and the authority of Roman Catholicism as seen in the monuments that mix paganism and Christianity with artistic and architectural genius. The streets teem with tourists from all over the world and locals on cell phones rushing to work; different languages swirl around you like persistent winds sweeping away any hope of understanding; strangers shyly ask you to take their picture using hand motions and ‘please’ and ‘thank you’ in their best Italian, and following the moving crowds is a good alternative to buying an expensive tourist map.

Rome was not built in a day and cannot be seen in one. But Rebecca and I saw some of Rome in five hours. We got there full of enthusiasm and raring to go albeit four hours later than we planned! The first thing we decided to go to was Piazza Barberini, to see the famous Fontana del Tritone – carved by the sculptor  Gian Lorenzo Bernini in1642. The fountain was commissioned by the Barberini family whose family coat of arms is three bees. The fountain features the sea-god Triton as a merman sitting on top of four dolphins that entwine the papal tiara and the Barberini coat of arms on a shield. It is another interesting mixture of Roman paganism and Catholicism. 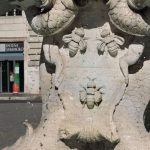 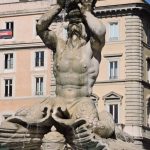 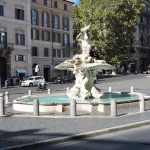 The Temple of Hadrian in Piazza di Pietra

Our second stop was in Piazza di Pietra, to take a look at the ancient Temple of Hadrian, which dates back to 145 AD. This is the temple dedicated to the deified Emperor Hadrian. The Temple was built by the son he adopted – Antonius Pius – who ruled the Roman Empire for 23 years. He was known as one of the Five Good Emperors. All that survives of the original building are eleven Corinthian columns. The columns are impressive! 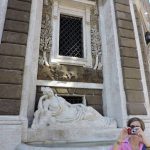 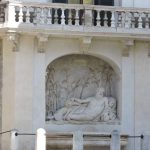 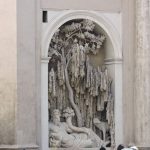 We could not miss the most famous Pantheon, ‘the temple of all the gods’ in greek. The Pantheon was originally built in 27 BC, but the current temple was built by Emperor Hadrian in 126 AD. It has been in continuous use since 700 AD. It is dedicated to Saint Mary and the Martyrs. A perfect sphere of 43.3 meters in diameter would fit inside the building. (aka Fountain of Four Rivers)

Next stop: Piazza Navona, to admire the beautifully sculpted Fontana dei Quattro Fiumi. The fountain built and sculpted in 1651 by Gian Lorenzo Bernini, with the Egyptian Obelisk of Domitian in the center. The four rivers in question are the Nile, Ganges, Danube, Rio De La Plata and they represent the four continents where papal authority had spread. We couldn’t miss out on a little peek of Saint Peter’s Square in the Vatican City. The Vatican City is 110 acres with a population of fewer than 900 people. It is the smallest internationally recognized independent state in the world with respect to both area and population. It is walled enclave within the city of Rome and it is ruled by the Bishop of Rome – the Pope. Saint Peter’s Square – Piazza San Pietro has at its center a 4400 year old Egyptian Obelisk and at its head the Basilica of Saint Peter (designed by Michelangelo). The square was designed by Gian Lorenzo Bernini in the 17th century. The obelisk functions as a sun dial and the sun moves through the signs of the Zodiac set in the marble of the courtyard. The square is so full of things to see that one is constantly in a state of wonder at something unexpected and beautiful found there. Finally we found ourselves crossing the river Tiber on Ponte Sant’Angelo, builtin 134 AD by Hadrian to connect the city to his mausoleum which is now known as Castel Sant’Angelo. The ashes of Hadrian, his wife and son, and other Roman emperors are located here. It was formerly used by the popes as a fortress, residence, and prison. Executions were performed in its inner courtyard! It is now a museum. The mausoleum was the tallest building in Rome when it was built. The statue of the Archangel Michael atop the castle reflects the legend told of his appearance there in 590 AD where he sheathed his sword and thus announced the end of the plague in Rome.