Cesena: the Flagship of Malatesta Novello

Bike around the old town and explore all the historical landmarks

When we think about Romagna, the first thing that comes to our mind is probably The Riviera Romagnola, with beautiful and lively cities by the sea, such as Rimini, Riccione, Cesenatico, which every year host thousands of tourists. But in Romagna there are many other things to see, many other cities, many other little gems that are often left behind because are less popular destinations. Cesena is one of these!

Cesena is a very quiet and old city on the river Savio, it doesn’t offer much nightlife (despite the fact that it recently became a college town), nor a sea view (the seaside is only 10km away by the way!) but is a lovely town to visit over a weekend, to spend some quality time exploring all the historical landmarks, to bike around the old town, and just relaxing while tasting all the typical food.

The old town of Cesena is one of the loveliest in Romagna, with plenty of narrow streets in which it is always a pleasure to get a bit lost while exploring around. A gorgeous meeting point, is the Fontana Masini, situated right in the middle of Piazza del Popolo, which also host the local market twice a week. The fountain was designed by a local architect, Francesco Masini, and was accomplished in 1591. From here you can admire all the picturesque features of the Old town, all at once: bright coloured houses, arcades that host various shops and cafés, and the facade of the Rocca Malatestiana. One of the gems of Cesena, in terms of historical buildings, is for sure the Biblioteca Malatestiana, situated right in the middle of the old town. The library, which was located inside of an old Franciscan monastery, was commissioned by the Lord of Cesena, Domenico Malatesta Novello, with the intent to provide a suitable place to store all the codexes owned by the friars. The construction was directed by Matteo Nuti (a pupil of Leon Battista Alberti) and lasted from 1447 to 1452, and the library opened to the public in 1454. The library holds a record: it was the first European civic library, i.e. Novello demanded that all the books and the library itself were owned by the commune of Cesena, rather than the monastery. This avoided the dispersion of the books collection, which is something that unfortunately happened in many monastic libraries instead. The library still maintains intact its Renaissance style, with the original furniture and codexes. In 2005 the UNESCO included it in the first place of The Memory of the World Register list.

The main room is the Aula del Nuti. On the tympanum of the magnificent walnut door, carved by Cristoforo da San Giovanni in Persiceto, stands out the emblem of the Malatesta family, the elephant. On the elephant a latin writing reads: “Elephas Indus culices non timet”, which means ‘The indian elephant does not fear mosquitoes’, and was probably zinger addressed to their enemies, the Da Polenta family of Ravenna, an area then infested by mosquitoes. The Aula del Nuti is breathtaking: upon entering it, the impression is to be in a miniature church rather than in a library, because the structure has a plan with three naves, all three with vaulted roofs, and a central rose window. There are 58 plutei (pine benches), 29 per side, where the ancient books and codes are kept, secured with iron chains. There codexes cover various fields of study such as religion, Greek and Latin classics, sciences and medicine. In this room the colours as well have a particular role: the white of the columns (faith), the red of the terracotta floor (charity), and the green of the plaster (hope), and all three recall the colours of the Malatesta emblem. 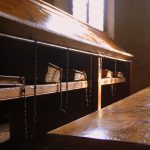 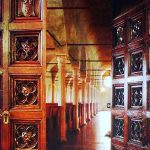 Detail of the walnut door 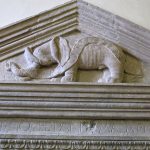 Another result of Domenico Malatesta Novello interest in improving the beauty of his city is the Rocca Malatestiana, the fortress of Cesena. The fortress was actually destroyed a couple time before the coming of Malatesta Novello, in fact the current structure is the third reconstruction: the works started in 1466 and lasted until 1477. 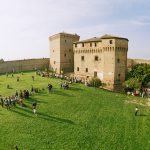 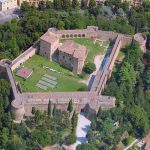 The Rocca lies on Colle Garampo, surrounded by trees, and overlooks Piazza del Popolo. The structure is quite irregular, there are 7 external towers and two internal ones (called ‘Male’ and ‘Female’, which today host an exhibition of Malatestian Ceramics and the Museum of Agriculture respectively). During the 19th century and great part of the 20th century the fortress was used mainly as a prison. Inside the walls of the fortress there is a large courtyard, which was once used as a parade ground, where soldiers could practice but today it is a place destined to cultural events such as concerts, plays, exhibitions or historical re-enactments. From the walls of the Rocca you can enjoy a breathtaking view of the whole city.