A work of architecture restored to its original beauty

It’s a spring morning, one of those days when the air is scented with freshly cut grass and the trees are starting to blossom, close to marking the end of winter and the arrival of springtime. Our tale takes us along the atmospheric streets of the historic centre of Sassuolo, a small city on the provincial border between Modena and Reggio Emilia, which has gained acclaim worldwide thanks to its famous industrial district for the production of ceramic tiles. However Sassuolo not only boasts a manufacturing tradition, now synonymous with innovation and cutting edge technology, but is also hosts to a remarkable heritage of historical buildings, gardens and residences dating back to past eras.

Despite the inexorable passing of time, these locations remain standing before us, testimony to a past splendour that today have been restored thanks to the love of its residents, such as the Cavallerizza Ducale, regaling us with its enchanting style right in the centre of the city, just a few metres from the Palazzo Ducale. This is an extraordinary building, which amazes visitors with its charm and expertly renovated architecture, where the spirit of the past lives in harmony with the modern surroundings. Here we enter the building, to discover its innermost secrets. A journey that takes us back to the times of the Estense Duchy when the noble family governed in this area of Emilia. Indeed the Cavellerizza Ducale was built between 1781 and 1788 on commission by Duke Ercole Rinaldo III to remedy the lack of stables and lodgings for the “Dragoni Ducali”  (armed corps) that followed the Estense Court when moving to the palace in Sassuolo. This building was part of the “Delizia Estense” (Estense Delight) together with the Palazzo Ducale of Sassuolo and the surrounding buildings, used as the summer residence.

From an architectural point of view, the Cavallerizza features an imposing wooden roof with two slopes, supported by 23 trusses, while the northern façade displays graffiti painted walls as a backdrop to the view of the Peschiera from the Palazzo Ducale. An extraordinary and impressive work with a unique identity. It was once the “Teatro delle fontane” (Theatre of Fountains), where visitors could admire marvellous water features for the pleasure of the audience, who sat on benches clad in tufa stone and shells, while the scenic background provided a view of the “Estense mountains”, from which sprung fountains below the peak, still seen today, of the “Aquila Estense” (Este’s eagle). A noble and highly valued symbol that identifies the coat of arms of the Duchy. Sadly the history of this building has not always been so glorious, having been left in serious neglect over the years. New life has now been given to the Cavallerizza, which as well as being used for community and cultural initiatives, has also become the elegant and original headquarters of Studio Pincelli & Associati, which together with Mr. Stefani, Chairman of the System Group, a leading industrial automation company, were the star actors in this ambitious restoration project, started in 1991 and completed in 1998. Behind this restoration work hides a story of passion and love for the city of Sassuolo. A gesture of respect and sign of deep attachment to this area, which occupies an important place in the hearts of its benefactors, who through the restoration of the estate, aimed at restoring dignity and magnificence to one of the most fascinating buildings of the city. The architectural restoration of the Cavallerizza Ducale hides another important aspect: the desire not only to restore ancient walls and bricks for a question of appearance, but also the wish to restore the social value of the building, to become a reference point for all those living in Sassuolo. The functionality regained through this work make the building an integral part of the city scene, where people can meet and socialise. 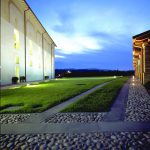 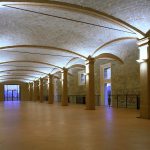 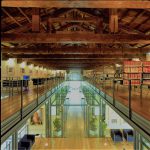 We would love this journey never to end. A little like when we turn the last page of a great book that has thrilled us and accompanied us in this adventure, in the same way, room after room, we reach the end of our visit. We stop in front of the Peschiera, wishing to imprint this extraordinary work of art on our minds, set against the open sky that surrounds us with its history, nature and culture. We carefully observe, in a desire to relive the era from the distant past and retrieve the signs of the past to blend with the present. The Cavallerizza Ducale is an emblematic example of architectural restoration, embracing both the contemporary and antique. A sublime art form that expresses the culture of its people and its new identity as a living and functional venue.

The sun shines high in the sky, and it is now lunch time, where the narrow streets of the centre, previously enlivened by people coming and going, are now hushed in tranquillity. The time has come to make our way home, taking with us memories of an experience strolling through history, but with no time machine; here the memories simply transport us into the past, while dreams project us into the future.