Aci Trezza is a village 15 km northern than Catania, in Sicily, where takes place a masterpiece of Italian literature: the novel “I Malavoglia” by Giovanni Verga, published by the end of the IX century. Today, the town is built up quite too much, as the whole area in front of the seaside. Once, it was for sure a charming fishermen village, before all these 60s buildings. But here you can still find some corners where the original atmosphere survives: the church surrounded by palm trees, the square with old people strolling and chatting on the benches, the walking path along the seaside where cars are forbidden and where you can spot the black sea rocks widely told in the Novel. In the past, during storming days women used to wait here for their husbands coming back on their wooden fishing boats. Those fishing boats still exist, same as a rustic wooden building, some kind of club where fishermen wait for something happening on the sea, while playing cards.

From Aci Trezza harbour you can easily spot the black Faraglioni (i.e. sea rocks). Local legends say that the biggest rock was the first one ever appeared from the Sicilian sea before the whole island arose. Here I had lunch with some stunning spaghetti with bottarga and sea urchins, but I won’t comment because Sicilian cuisine is not for talking, just for tasting!

Then I joined a student group whose teacher was telling the story of Malavoglia Family. She was so accurate that I was taken over my school memories! Listen to this story exactly in the place it took place, is intense: Verga used to spend here his Summers, meeting the locals and listening to the stories of those fishermen. He was a master in writing it down in such a real way, maybe rude, but deeply ironic. 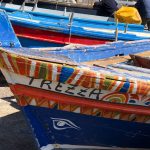 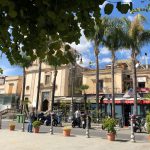 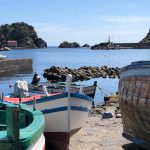 The school group I queued to, walked to the so called “Casa del Nespolo” (i.e. medlar’s house), the ideal Malavoglia Family home, where a theatre group was waiting for us, acting the whole story in the courtyard. I found myself in the very middle of a theatre representation of the book! But it got late and I run for a cab, on Luchino Visconti square: a great Italian director who filmed a very famous movie out of this novel. Back to Catania, I feel I got in touch with the real Sicily this time, while tasting an almond and coffee granita, together with some fresh cream and a typical sweet bun.